The usual motley crew assembled at the Wych Elm for what had been a widely billed as a green and muddy run. Our Hare, Fickle Fart had, as usual, roped in a glamorous assistant, this time in the shapely form of Smack the Oyster, who has somehow still not been thrown out the country despite loitering with intent to become a British subject long after her visa had expired.

After a mercifully short Hare talk on this bitterly cold night the run headed smartly for Richmond Park, which was fortunate as half the pack ignored the trail and made their own way there. The hare was very appreciative of this smart thinking and congratulated the FRBs on their ingenuity with cheerful remarks like “Can’t you follow a simple bloody trail you bunch of ******** and ***** and ****!”

Feeling smug the FRBs entered the park and began the traditional search to see which way round we would go. The trail turned out to be a left hander, punctuated with a few cunning zig zags and well placed checks. The trail exited the Park through Ham Gate to weave around Ham Common for a mile or so along narrow shiggy ridden woodland paths in stygian darkness only to bring the pack back to within a few hundred yards of Ham gate again and a check on the edge of the common. The first arrows away from the check led the pack down a long alley way, so long in fact that alarm bells were beginning to sound and a sense of déjà vu descend on those who were familiar with FF’s trails. Sure enough, at the end of the alley way, the pack were greeted with the inevitable False Trail marking accompanied by a mocking message, just to add insult to injury. 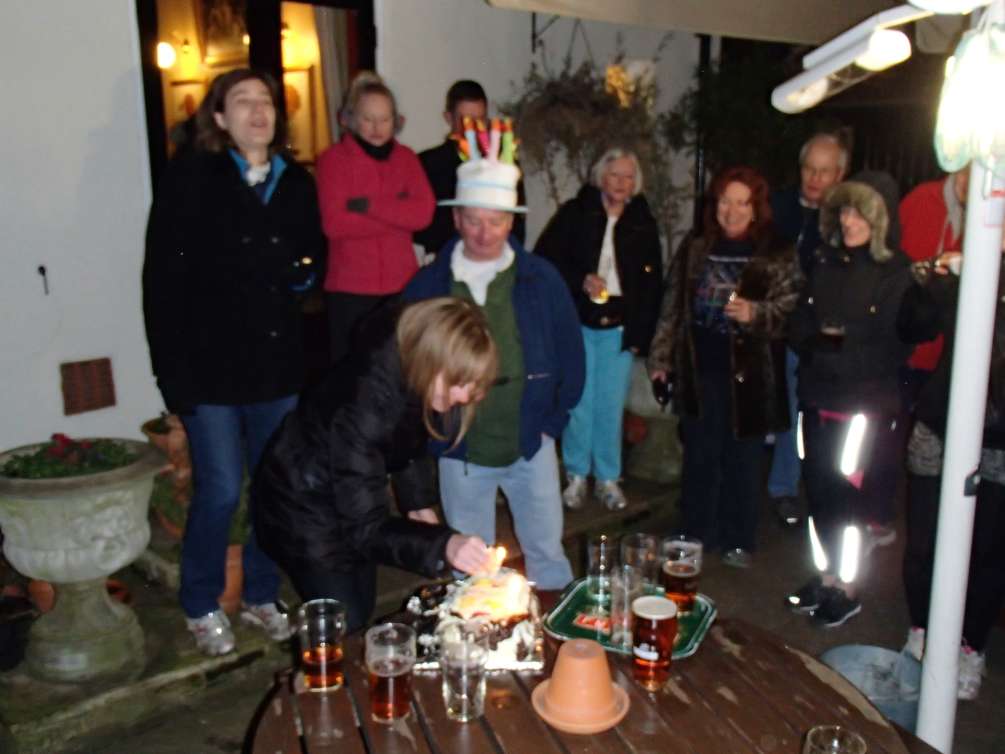 Back at the pub Manny, the congenial Spanish Landlord served up bowls of chips and a circle was eventually formed in Wych Elm’s stylish beer garden and our Hare, Fickle Fart, was presented with a naked lady, courtesy of Dingo, not Dingo herself of course, but a cake baked by her in the shape of a naked lady, as he had gained a year recently and a celebration was considered in order. The lady cake was quickly demolished and consumed by a hungry mob. Our RA s offered some stories about exciting stuff that had happened but your scribe has long since forgotten what they were. The evening concluded with the usual festivities.