Hares Dingo and Next Week

The open fire that greeted us, along with the Hares, at the White Horse was very welcome on this un-seasonally cold evening. Dingo wore a hat that was slightly taller than her, she had, just the day before, declared, in an email from Cairo, that this would be a “Mad Hatters” run. For what reason never quite became clear, but Dingo shares a surname with the girl who inspired the original Alice in Wonderland so maybe that had something to do with it; Google this if you doubt it. The pub had kindly reserved the area around the fire, but it caused some consternation when some Hashers noticed that all the tables around them bore notices declaring that they were reserved for a “Running club”, but they relaxed again after it was explained that this actually meant the Hash.

A week in Egypt, under its new Islamic rulers, had clearly done nothing to instil in Dingo the Muslim feminine virtues of self-effacement and deference to males as she barked orders at all and sundry as the process of parting the hashers from their bags and getting them all outside became even more protracted and chaotic than usual due to a conflict between the stand in GM Pope’s Mussoliniesque obsession with starting runs on time and Dingo’s attempts to give Nut Sucker and other late comers a chance to get changed and deposit their bags. 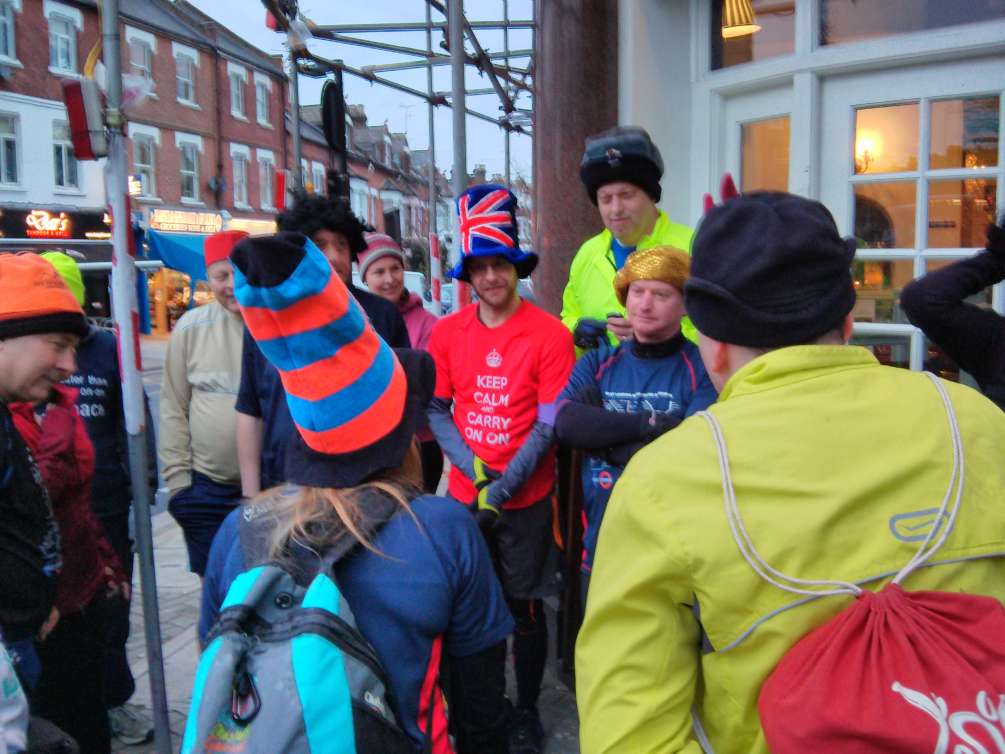 Once outside, in an act of enforced jollification, silly hats were handed out to those who had come without, or baht’at as they say in More On’s neck of the woods, and the most garish and camp of those was reserved for this humble author, who had, in reply to Dingo’s email, had the temerity to suggest that a run on Hampstead Heath might be sufficient entertainment in itself without the need for ridiculous headgear. The Hares’ talk introduced several exotic new forms of check, including group hugs and the somewhat risqué “saddle slap check”, as if there were not enough perversions perpetrated on Hampstead Heath as it was.

The trail made a bee line for the Heath and the first check at the end of the causeway between Hampstead ponds. What happened next is a matter of conflicting accounts but it ended up with the pack all sliding down a slippery slope and then running around like headless chickens at end of a very long false trail on the North side of the ponds. After Dingo screaming “On Back” until she was hoarse (we should be so lucky) the pack eventually returned to the check and was directed across the causeway, this was later presented by the Hares as a cunning tactic to get the pack together, well, as we say on the Hash, sounds like, sounds like…etc.

Anyway the trail settled down to a left hander round the Heath taking in some nice views of the viaduct pond and culminating in a drink stop a few hundred yards from the pub. Generally it was a good trail of the right length which stayed off the tarmac and kept the pack together, with the exception of one visiting City hasher who, obviously unfamiliar with the concept of hashing off road, away from street lights and the comforting smell of carbon monoxide, had managed to get lost and arrived at the drink stop just as everyone else was leaving.

Another discontent was Crap Nav, as we approached the pub we found him heading in the other direction with a face like a Lurgan spade. He had turned up late and had failed to find an arrow outside the pub –the first arrow was ten yards away and in the direction of the Heath, who would have thought of looking there?-anyway, not even Dingo’s sunny charm could coax him back to the pub and he stomped on towards the station, clearly not a happy bunny.

Back at the pub the staff were friendly, if somewhat overwhelmed at times, and, after the circle the pub generously laid on free food for the hash. 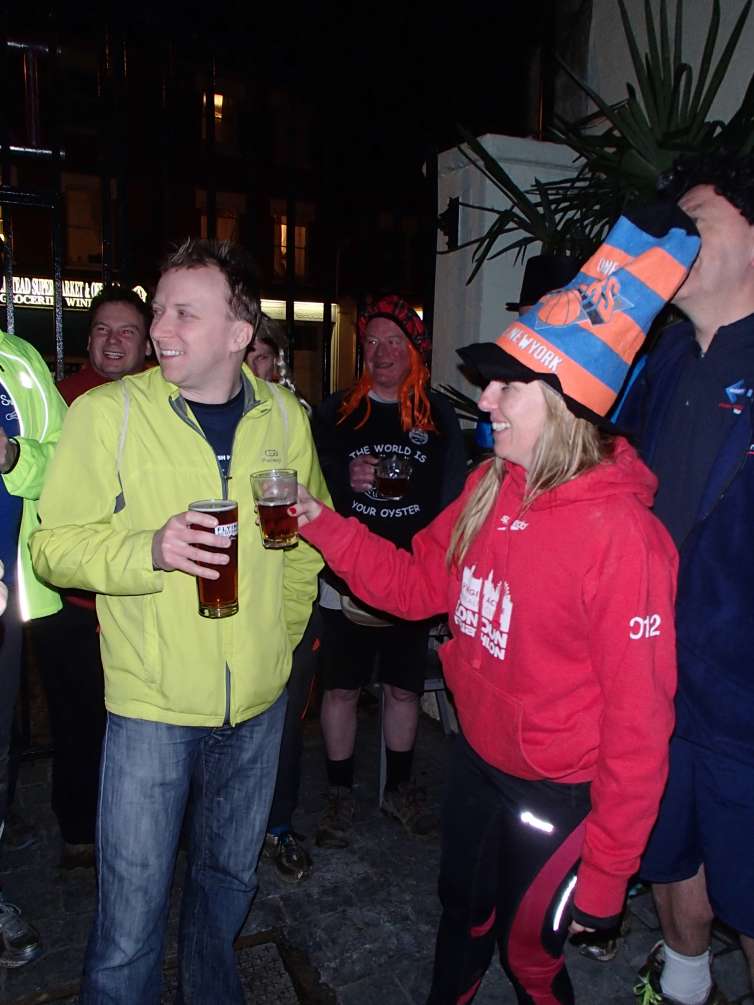 The circle took place in the pub’s tiny beer garden, down downs awarded, of course, to the Hares, to our welcome visitors from City Hash and an innocence of virgins who had enjoyed their first Hash run, and to a few sinners of which I was one, some ridiculous calumny about me being a grumpy old man for not wanting to run around in a silly hat. Moron got the prize for the best headgear, a rather fetching fleecy number; he had clearly taken advantage of the tragically high mortality rate amongst new born lambs on his native Yorkshire Dales this spring and had recycled one into a hat.

Towards the end of the circle the RA, Wacker, gave the floor to More On. It is hazardous to hand over the circle at the best of times, let alone to a man with a dead sheep on his head, as the relationship between brevity and wit is one that eludes many hashers, and when the temperature is hovering around zero it is not the best of times. We were treated to a rambling diatribe about an article in the Guardian involving some research that had claimed to link patterns of male baldness to heart disease, what this had to do with the Hash no one knew nor cared as we became far more concerned with the more immediate health risk of hypothermia long before it reached anything resembling a punch line. The practice making spurious associations between the physical characteristics of individual hashers and unconnected events reported in the press is a relatively recent introduction to the West London circle and it is one that is as about as welcome, and usually about as funny, as a turd in a swimming pool. Better to stick to the traditional circle humour based on parodying what Hashers have actually said or done, there is seldom any shortage of material.

Anyway, to paraphrase Guns n’ Roses’ November Rain, nothing lasts for ever, not even More On’s anecdotes, and eventually Tango got a chance to enlighten us that the location of her run next week is to be Temple. Thankfully we are to get a respite from the recent spate of fun fascism and are not obliged to don bizarre clothing or headgear for this trail, but, as Tango is the Hare, perhaps we should, out of respect, all turn up twenty minutes after the run has started, get lost on the trail and spend the rest of the evening moaning about it over extremely large glasses of Sauvignon Blanc.