After a weekend of sunning themselves silly on the beaches of Cyprus the intrepid Dingo et al re-joined us for this trail, all returned safe and sound from their sojourn overseas. But no! One errant hasher had failed to make the return leg and, allegedly, chosen to travel the shores of the wee island earning coins as a roving gypsy. Indeed, after being pushed unceremoniously off a cliff, Fickle Fahrt had decided to stay in Cyprus – whether out of a fit of pique at his brusque treatment, or in an attempt to inculcate him into the burgeoning black market as a palm-reader remains to be seen. Suffice to say, he was last seen sporting a gold earring and a bandana and with a queue of young ladies, eagerly waiting with coins in hand, on the beach.

And On-On to the Kingston run. Numbered as run 1442 by the GM and Hared by the redoubtable Man Magnet, the hashers dutifully arrive at the Wych Elm in Kingston in fine form. A regular haunt of the WLH of some 20 odd years, the pub knew us well, and had accommodated for us suitably. We were joined by some virgins, some visitors and some veterans in the form of the venerable Drain Oil from the Kuala Lumpur hash of some 44 years standing.

With beers to go, and dressed accordingly for the time of year – but, alas, not for the weather – we sallied forth into the suburbs of Kingston to enjoy the delights of Richmond park in bloom. The mood was light, but the skies were dark, and an apprehensive Stay Over (in shorts and Tee) led the On.

With a warning from the Hare that the beginning trail may be ‘a little tricky’ we hit the park, and immediately split three ways into a classic ‘Where’s the flour?’ formation. After some morose milling, the trail was eventually located and the pursuit began through the trees and across the heaths. With the addition of a Hash Horn, we cut a noisy swathe through the Richmond landscape, scattering deer as we went and generally making a nuisance of ourselves to all and sundry. Still, the Hare had promised us some ‘beautiful scenery’ in the form of the Isabella Plantation, and we were not to be disappointed.

Horticultural notes: after the May Bank holiday, and well into late Spring, Richmond Park will delight the visitor with beautiful displays of Magnolias, Rhododendrons, Azaleas and Camellias as you bask in the warm evenings with sunset glinting through the trees.

In a freezing gale and drizzle, numbing to those hardy fools in shorts and tees (Kiss my Ass and the Stay Over to name but two) we sought the sanctuary and shelter of the woods, where to our delight we were rewarded by the glorious blooms of the Isabella Plantation in full Technicolor. So blinded by the beauty were our lead hashers however, that they failed to pay any attention whatsoever to the route and took us back on ourselves to complete two if not three laps of the flowerbeds. Pretty though the scenery was, much grumbling could be heard amid the shrubbery. The Hare dutifully put us straight and we took off, once more, into the gloom. 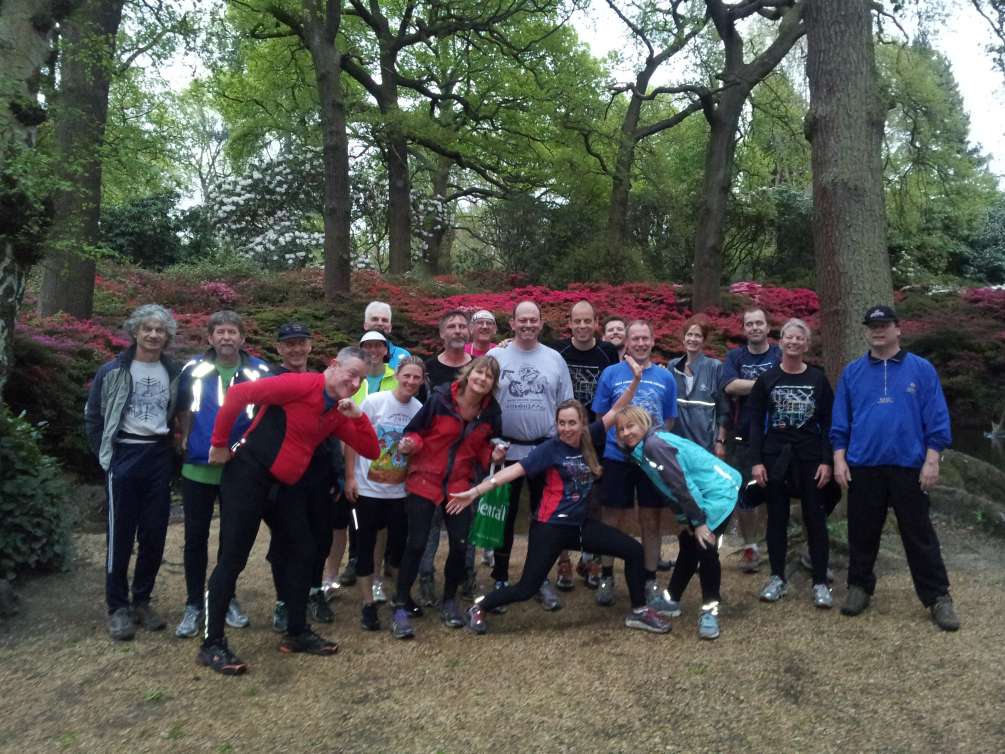 A grateful pack were rewarded for their efforts with a much-needed drinks-stop on the hill, with a wonderful view of the rain-soaked hills of Richmond, indeed, we could almost see the tops of the clouds, so elevated (into the wind) were we. After Pimms and crackers, both of excellent quality, we ran, hell-for-leather through the heather, to the gate and then the pub, for beer and more appropriate clothing.

After some social drinking and free chips from the bar, we proceeded to a the down-down in the garden, once we all suitably attired in scarves, borrowed coats and gloves. A wobbly and very uncircle-like circle was chalked onto the floor of the beer garden and Jakarta hasher Roll Back was nominated to lead the down-downs. She immediately named Lick a Pile as her second (or bitch as Dingo insisted on calling him).

Our virgins were anointed, (one in absence, but stood-in by Dingo), our visitors were welcomed – from Dublin hash, but his name eludes me – and various misdemeanours were punished. The trail was voted as not being Shitty, unlike the weather, though we tried to blame Man Magnet for that, but she was having none of it. Kiss my Ass was charged with ape-like behaviour after being witnessed swinging through the trees at one of the checkpoints and another charge was awarded to a WLHer who had finally managed to convince his better half that a weekend hill-hashing in Norway was a far better way to spend the final May Bank holiday than gardening. Well done sir! Dingo was called into the circle no less than three times for various charges, yet still didn’t manage to drink a whole pint of Fuller’s finest – which should have earned her a charge on its own!

And so it was, after a wet and weary night, the latest chapter in the tale of the WLH came to a cheery, beery and somewhat bleary end.